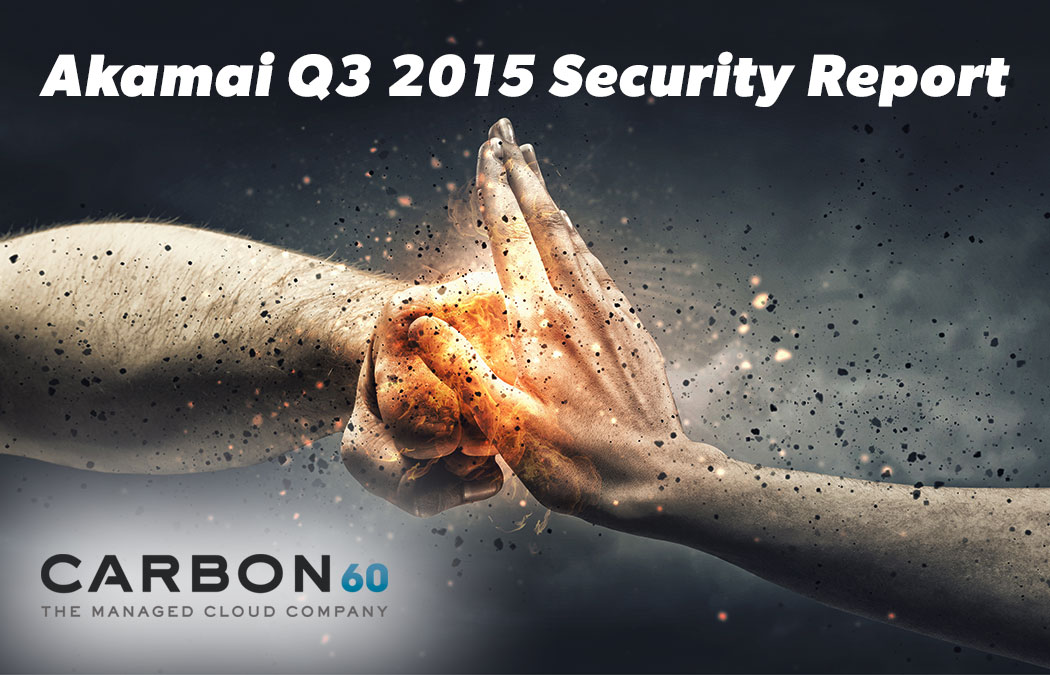 Today’s online security risks are top of mind for many CIOs and CEOs. With significant data breaches happening at major retailers and websites in 2015, it’s no wonder why security concerns are at the forefront. In fact, Gartner lists Security in the CIOs Top 10 Technology Priorities 2016, and the National Association of Chief Information Officers lists Security as the #1 Technology Priority for 2016. Carbon60 also sees security as a critical success factor when delivering cloud solutions for its clients. As such, in 2016 Carbon60 will be adding more security services to complement our advanced hosting infrastructure, which will be designed for customers who have the highest security and compliance requirements.

Akamai, our partner for Content Delivery Networks (CDN) which includes many security features, published its Q3 2015 Security Report and it reveals a lot about what is happening in the world of internet security. This report identifies industries that were prone to attack, frequently used techniques and vectors, and where the attacks originated from. Using the report as a guideline for assessing threats and being prepared for it, Carbon60 gives its enterprise clients a head start using Akamai’s range of security solutions.

Key Findings of the Report

The findings are critical in identifying and strengthening weak spots in your web environment.

This may be due to more responsive Security Operations Centers (SOC) and more advanced Security Services (such as those offered by Carbon60) to curb attacks quickly.

Your Hosting Provider is Key for Security

With increasingly effective security services available, the results of the study are a big help in defining future strategies and services to implement for a secure environment. Akamai has been able to shine a light on new attack techniques, weaknesses, and criminal activities. According to the report, the top three attacking ASNs originated from a place that linked it to a Virtual Private System (VPS) of a leading hosting company. This goes to show that while mass-market hosting companies (who offer low cost hosting solutions like VPS) may seem like a good option, they are often a breeding ground for hackers. It is difficult to make a cloud hosting platform safe and secure. Carbon60 takes great strides to integrate security at every layer of our end-to-end hosting platform. While it may seem relatively simple to set up cloud hosting, in actuality it requires a high level of expertise to integrate leading technologies and an experienced team to keep it secure. Clouds are more vulnerable to attacks than on premise applications for the simple reason that cloud applications are usually accessible from anywhere in the world. Also, identifying and distinguishing an attack from routine use can be very difficult without leading tools like Akamai’s Web Application Firewall.

The Best Defense is a Good Offense

While many hosting companies will offer “reactive” security services (such as last minute DDoS shields), Carbon60 significantly reduces security issues through a proactive approach. Akamai’s Advanced Security Services offers important features that wrap around your application, such as multi-layered Web Application Firewall and Denial of Service Protection both of which handle large bursts of traffic while protecting your origin servers. In addition, Carbon60 creates a complete security stance with high-availability firewalls, virtual private networking (VPN) and fully managed patch rollout, along with a host of options including real-time intrusion prevention and detection, vulnerability assessment, log management, data backup and archiving, and much more.

While in some cases Akamai’s latest report is showing reductions (mainly in size of attack), in most cases attacks are on the rise. Probably the most alarming (and arguably the most important type of attack), the Web Application Attack, increased 96% compared to the previous quarter. Equally alarming in the report was that the top three attacks originated from low-cost VPS hosting providers. This underscores both the need to have an “application layer approach” to online security, but also is a warning for businesses that they need to align themselves with a cloud hosting provider that truly takes security seriously.